The Dijkstra algorithm is an algorithm used to solve the shortest path problem in a graph. This means that given a number of nodes and the edges between them as well as the “length” of the edges (referred to as “weight”), the Dijkstra algorithm is finds the shortest path from the specified start node to all other nodes. Nodes are sometimes referred to as vertices (plural of vertex) - here, we’ll call them nodes.

The basic principle behind the Dijkstra algorithm is to iteratively look at the node with the currently smallest distance to the source and update all not yet visited neighbors if the path to it via the current node is shorter. In more detail, this leads to the following Steps: 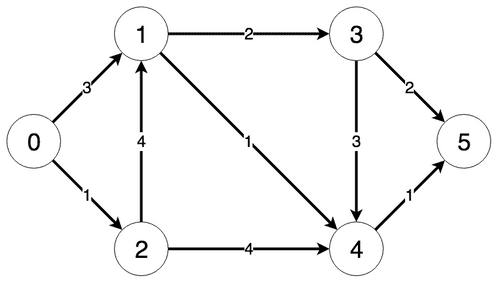 The steps the algorithm performs on this graph if given node 0 as a starting point, in order, are:

The runtime complexity of Dijkstra depends on how it is implemented. If a min-heap is used to determine the next node to visit, and adjacency is implemented using adjacency lists, the runtime is O(|E| + |V|log|V|) (|V| = number of Nodes, |E| = number of Edges). If a we simply search all distances to find the node with the lowest distance in each step, and use a matrix to look up whether two nodes are adjacent, the runtime complexity increases to O(|V|^2).

The space complexity of Dijkstra depends on how it is implemented as well and is equal to the runtime complexity.