The Point in Polygon (PIP) problem is the problem of determining whether a point is any arbitrary polygon. This might sound trivial for a simple polygon like a square or a triangle, but gets more complex with more complex polygons like the one in the example below. In this post, the even-odd algorithm, also called crossing number algorithm or Jordan’s algorithm (since it can be proven using the Jordan curve theorem), will be introduced.

A simple boolean variable that is inverted every time a crossing is found is also possible.

Consider the following polygon with 8 edges and two points for which we want to determine whether they are in the polygon: 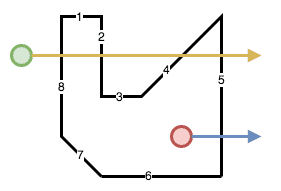 The steps the algorithm performs on this polygon to determine whether the first (green) point is in the polygon are, starting from the first edge:

The steps the algorithm performs on this polygon to determine whether the second (red) point is in the polygon are, starting from the first edge:

The runtime complexity of the Jordan Algorithm aka. Crossing Number Algorithm aka. Even-Odd Algorithm to solve the point-in-polygon problem for a single point is linear with respect to the number of edges. This is evident by looking at the code, which contains a single loop over the edges, with no recursion or further function calls or loops.

Formally the runtime is O(|V|), |V|:=number of edges in the polygon.

The space complexity is also linear w.r.t. the number of edges, since only fixed-size variables need to be stored in addition to the polygon. Additionally, the algorithm can be implemented on-line, meaning there is no need to look at past edges during the loop, so they can be evicted from memory (or comparable performance improvement measures).

Getting to “Hello World” in C

The most important things first - here’s how you can run your first line of code in C.

To understand algorithms and technologies implemented in C, one first needs to understand what basic programming concepts look like in this particular language. Each of the following snippets should be compiled and run using the commands mentioned above.

Variables in C are statically typed, meaning the content of a variable needs to be specified when writing the code. The datatype for whole numbers, for example is int. Numbers with decimal places are typed float or double depending on the required precision. The type for text ist String.

Arrays in C are real arrays (as opposed to e.g. Python where they’re implemented as lists). The implications of that are that the size needs to be set when they are created and cannot be changed, but also that they are more efficient in C than they are in Python. Also, contrary to Java, C does not check array bounds. If you access an index that doesn’t exist, the program will read whatever is in the memory at that location (which will probably be gibberish).

Just like most programming languages, C can do if-else statements. Additionally, C can also do switch-case statements.

The above C code will print “Value is 5” twice.

C supports for, while as well as do while loops. break and continue statements are also supported. The below example illustrates the differences:

This will print the following to the terminal:

Note the last 0: it is printed because in the do-while-loop, compared to the while-loop. the code block is executed at least once before the condition is checked.

Functions in C can be declared similar to Java, but require less boilerplate since they don’t need to be part of classes or objects. Here is a minimal example of a function:

C requires the use of curly brackets ({}) to surround code blocks in conditions, loops, functions etc.; It also requires semicolons at then end of statements. While this can lead to some annoying syntax errors, it also means the use of whitespace for preferred formatting (e.g. indentation of code pieces) does not affect the code. Note how the Syntax of C is very similar to Java. The Syntax of Java, and many other languages that came after and/or were derived from C copy many aspects of its Syntax.

C was first released in 1972, is statically typed and was ported to many platforms with various implementations (one of which is GCC which was presented in this article). For more information, C has a great Wikipedia) article.