The basic principle behind thus gcd algorithm is to recursively determine the gcd of a and b by determining the gcd of b and a % b This hinges on the fact that the gcd of two numbers also divides their difference, e.g. the greatest common divisor of 16 and 24 (which is 8) is also the greatest common divisor of 24-16=8. This is therefore also true for 16 and 40 - in fact, rather than taking the difference, the remainder can also be used (repeatedly recursing on the difference will inevitable “pass” the remainder). In summary, the euclidean gcd algorithm uses these 2 steps:

Using the remainder has a much faster runtime compared to using the difference.

When computing the gcd of 1071 and 462, the following steps will be taken:

The runtime complexity of the Euclidean greatest common divisor algorithm is O(log(max(a,b))) (the logarithm of the maximum of the two numbers). Using the remainder rather than the difference is considerably faster - if the difference would’ve been used this greatest common divisor algorithm would’ve had a runtime of O(max(a,b))

The space complexity of the Euclidean greatest common divisor algorithm is equal to the runtime, since every recursive call is saved in the stack and everything else is constant. 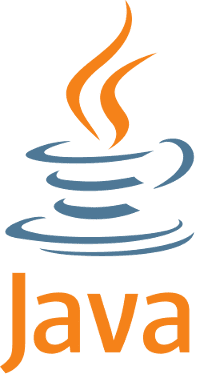 Getting to “Hello World” in Java

The most important things first - here’s how you can run your first line of code in Java.

That’s it! Notice that the entry barrier is a little higher with Java than it is with e.g. Python - but Java is much faster and, in my experience, tends to have fewer bugs in large projects due to strong typing and other factors.

To understand algorithms and technologies implemented in Java, one first needs to understand what basic programming concepts look like in this particular language. Each of the following snippets should be surrounded by the boilerplate code of the hello world example and should be compiled and run using the commands mentioned above.

Variables in Java are statically typed, meaning the content of a variable needs to be specified when writing the code. The datatype for whole numbers, for example is int. Numbers with decimal places are typed float or double depending on the required precision. The type for text ist String.

Arrays in Java are real arrays (as opposed to e.g. Python where they’re implemented as lists). The implications of that are that the size needs to be set when they are created and cannot be changed, but also that they are more efficient in Java than they are in Python.

The above Java code will print “Value is 5” twice.

Java supports for, while as well as do while loops. break and continue statements are also supported. The below example illustrates the differences:

This will print the following to the terminal:

Note the last 0: it is printed because in the do-while-loop, compared to the while-loop. the code block is executed at least once before the condition is checked.

Functions in Java can be part of a class, or of an object of a class. For more information on object oriented programming I recommend the w3schools course. Here is a minimal example of a function as part of a class (also called a static function):

And here’s an example of calling a function of an object of a class:

Note how the first example uses the static keyword, and the second example needs to instantiate on object of the class before in can call the function of that object. These are some of the differences in class methods and object functions.

Java requires the use of curly brackets ({}) to surround code blocks in conditions, loops, functions etc.; It also requires semicolons at then end of statements. While this can lead to some annoying syntax errors, it also means the use of whitespace for preferred formatting (e.g. indentation of code pieces) does not affect the code.

Java was first released in 1995 and is multi-paradigm, meaning while it is primarily object-oriented, it also has functional and reflective elements. It’s statically typed, but offers some amount of dynamic typing in recent versions. For more information, Java has a great Wikipedia) article.